I just read (another) article about practicing random acts of kindness, and how you’re guaranteed to brighten someone’s day if you do them. How you’ll change the way that person treats others. How you’re going to save people from committing suicide because they just needed a stranger give them a wink, a smile, and to buy them a cup of coffee. And you know what? Sometimes it does happen. I’ve seen it. I’ve witnessed some amazing displays of selflessness and generosity in my time. Sometimes it’s all really cool, and inspirational, and when you inspire someone else to try it too, it’s the best thing since, ever. It’s easy to keep doing good deeds when you have a positive experience. Sometimes we can make a difference(!) Sometimes the underdog wins(!) Sometimes we can be the change we wish to see in the world(!) Sometimes stories have happy endings(!) And sometimes the story ends with you having to shoot your dog in the head and bury him out behind the barn. 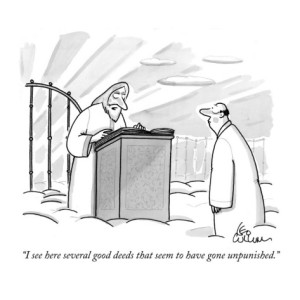 The super-happy-positive-inspirational articles talk about the good stories, but they don’t tell you how to deal with the ones that might bum you out. Lots of people have bad/awkward/disappointing experiences with trying to help someone else. Some of them stopped doing good deeds a long time ago, because they wound up feeling shitty and disappointed, and why would you keep doing something that didn’t always make you feel the way that article promised you would? You can hardly blame someone for just saying, “Fuck it.” We have some unrealistic expectations of how we’ll feel after doing something nice for others. Maybe we forget for a moment that we live in kind of a fucked up world. So, you have to go into this with the right perspective. You have to do good deeds for the right reasons. You have to be realistic, but you can still hope for the best. None of the articles I’ve read about doing good deeds for others point out the shit side of the story, or how to shake that shit off and keep being awesome. And we need you to stay awesome. So here, my friends, is the shit side of the story, and how doing good deeds for the right reasons will make you feel good, even if other people act like assholes. Because people are always gonna need help, and there are always gonna be assholes. (Also, I guess the following is sort of a poem. I repeated the same thing in several different places, so I’m pretty sure that makes it a poem. Let’s just go with that.)

Just don’t do good deeds in hopes of recognition, gratitude, or to gain anything in return. Because, sometimes, you’ll get none of those things. Sometimes, you’ll even get kicked in the nuts, just for trying to do a good deed.

Just don’t do them expecting to change hearts and change minds. Some people won’t even notice. Some people will notice, and won’t give a shit. In a year, whether they gave a shit or not, some people will have forgotten you ever did anything at all.

Just don’t do them so you can tell the whole goddamned Internet about it. It negates the spirit of a genuine act of kindness. It cheapens it. It stops being about the good that you did, and starts being about you. In this case, you’ve gone and fucked your own damn self, asshole.

Do it because doing a good deed makes you better. And after getting kicked in the nuts a few times, you deserve to feel better.

So brace yourself. The world is full of cynical people. Shit isn’t always ice cream and unicorns. Just keep trying, because someone out there is worth it. You just might need to wade through some disappointment to find them. You won’t know unless you keep doing nice things for others, and you won’t want to keep doing them if you’re doing it for the wrong reasons.

And, here’s to not getting kicked in the nuts today. 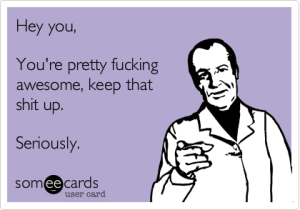